Leicester City triumph and lessons you can apply in stock market 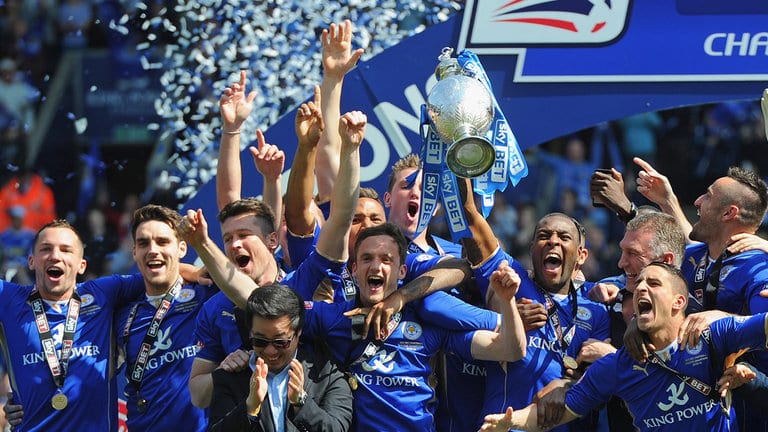 Even if you are not a football fan, you have probably heard about Leicester City winning the English Premier League (EPL) championships this season. This is a significant event because in the past 20 years, the trophy has been passed around only 4 big clubs, i.e. Manchester United, Chelsea, Manchester City and Arsenal. Leicester City’s victory was agains’t all odds (in fact they were given 5000:1 chance at the start of season) and this fairy tale like story has been used by the business world to derive business lessons ever since the outcome was determined on 2nd of May.

So we couldn’t help but to also reflect on what we have learned from the stock market perspective. Indeed there are valuable lessons that are applicable to investors & traders alike.

It doesn’t matter where you start

Just 12 months ago, Leicester City was struggling at the bottom of the league and they narrowly escaped relegation (being pushed down to the second tier league called the Championship league).  They had no history of winning the EPL and never came close.  In fact the club has spent most of the time outside the Premier League.

So it really doesn’t matter where you start.  Maybe you have only $500 to invest.  Maybe you don’t know anything about fundamental and technical analysis at the moment.  You can still make it to the top if you follow an effective system.  Don’t let anybody tell you that “stock market is not for you” or “you won’t make it.”

Big money has nothing to do with it

Leicester City did not have the financial power that clubs like Manchester United and Chelsea enjoy.  They probably do not even have the pull that clubs such as Newcastle United, Southampton or Stoke City have ad in the recent past for various reasons.  Because of that – they have to put extra effort into scouting, screening and selecting good players with high potentials.

Having a large capital to start with in stock market will give you some advantage, but it doesn’t determine your success.  You can always put in the effort to scout and screen the stock market for stocks with high potential for growth and affordably priced.  You don’t have to take the short cut of buying “blue chip” stocks that your uncle recommended.  Learning how to look into fundamental and business data of a company will serve you well in the long run.

Claudio Renieri – the manager of Leicester City knew that his team are not made up of the most technically gifted group of players.  They did not harbor the false hope that they can play the slick passing, procession football made fashionable by the big clubs.  What they have were speed and stamina in abundance.  Boasting 5 of the fastest players in the league, they used their pace to cut through opponents, from the first minutes to the lasts – they just keep running for the ball.

There are so many ways to make money in the stock market, and determine what suits your personality, character and commitment is crucial to your success. Value investing – glorified by the famous Warren Buffett may not be your cup of tea if you are naturally a fast paced or impatient person.  Intraday trading may not suit you if you do not have the aptitude for fast decision making and the discipline to follow money management rules.

Nicknamed the Tinkerman for a much-derided preference to rotate his Chelsea team during his last spell in England, Ranieri has done little to live up to that pseudonym. Leicester have the most consistent team selection of any team this season, using only 23 players, including just 11 who have started at least 15 games.  Ranieri has made only 27 changes to his starting eleven, which is the second fewest of any Premier League champion (and will be at the end of the season, too, unless he changes his whole team for the remaining two games).

Almost all successful investors or traders that we know follow a system diligently.  A system allows them to minimize variables and therefore giving them consistent results in the long run.  For instance – Kathlyn Toh only looks at a portfolio of less than 20 stocks, which does not change very often.  Because she is focused on a small portfolio she gets to know the stock and price sensitivity very well.

The first criteria for success in stock market? Get started.

Know that this will be a learning journey to find out what “style” of investing or trading is best for you, and to find a system that you can follow diligently to produce consistent results.